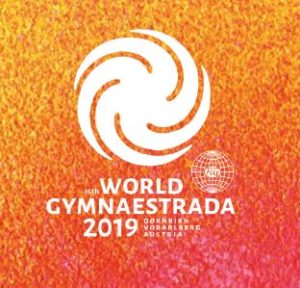 Held every four years since 1953, the World Gymnaestrada is the biggest gymnastics festival in the world with over 20,000 participants from over 50 nations. The aim of the event is to bring together people from all over the world to perform gymnastics. Everyone who enjoys doing gymnastics can take part regardless of age, gender, talent, religion and social status. The World Gymnaestrada is classed as “Gymnastics for All”, which represents movement as fun and pleasure together in sport without competition and pressure as the focal point.  Therefore there is no evaluation of performances.

All participants have a compulsory performance and can register for an addition variable performance:

With the Variable performances, Groups have the opportunity to register for several different categories:

There is also the World Team where everyone can take part.  The choreography is provided at the end of 2017 for everyone to learn at home.  During World Gymnaestrada the participants from all countries come together for a dress rehearsal and perform two shows.

It really is gymnastics for all!

The next World Gymnaestrada is being held in Austria on 7 – 13 July 2019.  Attendance requires registration through GymSports NZ in June 2017.  If you are interested in attending, please email us by 25 May.