The newly elected President of the Federation Internationale de Gymnastique (FIG), Mr Morinari Watanabe, paid a ‘flying’ visit to New Zealand just two weeks into his role. Mr Watanabe was elected as only the 9th FIG President in it’s over 135 year history, at the 81st Congress of the FIG members in Tokyo, in October of last year.

“We are delighted Mr Watanabe is able to visit us in NZ, so soon after having assumed the role of President on January 1, 2017.” said Dr Denis Mowbray, Chair of GymSports NZ. “It is important for President Watanabe to see first-hand the gymnastics landscape in NZ. To have the first non-European President of the FIG come from the Pacific Rim, encourages us to believe that the development and growth of gymnastics in the Oceania Region will continue, and that New Zealand and Oceania will continue to contribute to the truly global promotion and progression of gymnastics.” added Dr Mowbray. 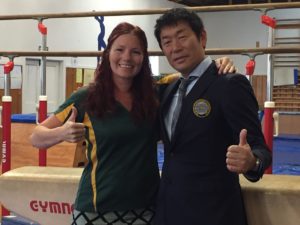 “It is an exciting time for GymSports NZ having had such positive representation at the Rio 2016 Olympic Games.  It was a pleasure to meet the President, and discuss his vision for gymnastics globally, as well as issues that are relevant to the Olympic and Commonwealth sports movements in New Zealand. We look forward to continuing to work cooperatively on building New Zealand’s performance and presence on the global gymnastics stage “, commented Kereyn Smith, CEO of the NZOC.

During his visit, Mr Watanabe said that there were more people who loved gymnastics [in NZ] than he imagined, and the FIG intends to help in the development of the Oceania regional which is currently still a baby.  And commented that he would like “New Zealand gymnastics to grow tall like their beautiful trees.”

When asked what progress would look like under his first term of Presidency, Mr Watanabe commented “Gymnastics is one of the top sports in the Olympic disciplines but only ranks 24th in the global sports.  My target is to make gymnastics one of the top 10 sports in 8 years.  During my first term as FIG President, I would like to progress branding of the World Championships and grow the popularity of gymnastics.”

See also what FIG had to report on Mr Watanabe’s visit.