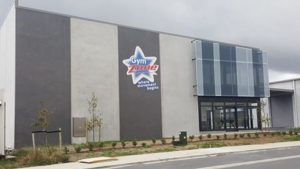 Gym Kids was created in 2011 by Tania and Pablo Donnianni, initially designed to take gymnastics to the schools in Central and West Auckland. Pablo saw a gap in the market and started as a mobile business, with a trailer full of equipment and setting up in school halls.

They started in Waimauku primary school close to Muriwai and then expanded into Point Chevalier and Ponsonby. Pablo and Tania have always been respectful to other gymnastics clubs and never operated in an area too close to another club.  They have good relationships with Waitakere Gymnastics Club, working together with Sport Waitakere delivering Kiwi GymFun in schools. 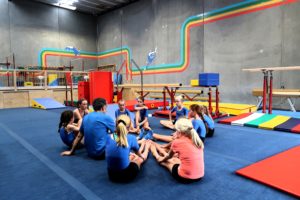 In 2016 Gym Kids were running programmes in 9 schools in Central Auckland, 9 schools in West Auckland and 7 schools in the Harbour region plus a semi-permanent set up in the Leys Institute gymnasium/community hall, where most of the gear had to be set up and packed down each day. Now Gym Kids is branching out with their own purpose-built facility GymZone at Hobsonville Point in West Auckland, which opened at the start of February.

While the mobile business continues to operate, Tania and Pablo decided that in order to further develop their programmes they needed a facility of their own. A gymnasium where they have the ability to control their own operation to expand gymnastics and recreational classes. The flexibility to set up and pack down enables Gym Kids to operate pretty much anywhere, but in order to offer WAG and MAG classes and enable athletes the opportunity to train and compete at a higher level, a permanent set-up was needed. 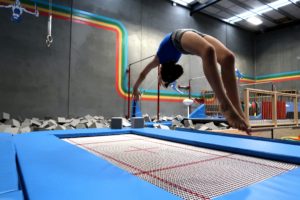 The new gymnasium is 400 square metres and features a huge foam pit servicing the high bars, uneven bars and the rings. Three trampolines, a trick wall, a sprung floor and tumbling track mean that the Club will be able to offer tumbling and parkour in addition to their existing pre-school, recreation, WAG, MAG, RG and TRA classes.  They will also be offering exciting opportunities for birthday parties and holiday programmes.

Because the facility was a new build, they have been able to specify what has gone into it and have even included a cute little junior gym with little bars, little uneven bars and little rings for the littlest kids.