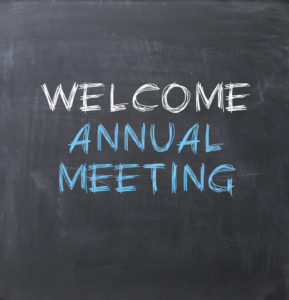 Over the next couple of months, the majority of Clubs will be holding their AGM’s. The Annual General Meeting is an essential part of the calendar for any incorporated society but do you know how they should be run? And more importantly – how to make them interesting and useful for those attending rather than a quick tick box exercise that has to be done each year?

The AGM is an important marker in the year for the Committee and the Club. Use it as an opportunity to reflect on the Clubs past year and to look forward to the new year.

Make sure that proper time and thought goes into the planning of the AGM. Instead of leaving things to the last minute, prepare the agenda well in advance and advertise it so that people know what to expect. If there are specific concerns or issues, make sure these are included on the agenda and prepare how you will cover them. People are far more inclined to turn up to an AGM if they are going to hear things that are relevant to them.

With the turnover of roles on the Committee, you may find that you have no one with a good understanding of the standard format of an AGM – have a look at this “How to” from Venture Southland on the structure of an AGM and what to include.

Here is another 5 tips to help your next AGM run smoothly:

1. Understand the club rules – It is really important that you understand the processes for running AGM’s contained in your club rules. This will include how much notice you will need to provide to members of the meeting, what information is to be provided to members, what defines a meeting quorum and voting rules.

2. Succession planning – don’t just wait until the AGM to seek nominations for the committee, especially for the key leadership roles. Throughout the year continually look for the next committee members, talk to them early about the role and, if need be, get them any training they will need.

3. Notice of meeting – make sure you send the ‘notice of meeting’ to members in accordance with the club rules but also make sure you also invite sponsors, life members, representatives from your associations, local politicians and any other stakeholders of the club to the AGM. AGM’s are a great way to bring people together to talk about how they can help the club, even if they don’t join the committee.

4. Special Resolutions – if you are proposing to change the club rules, club name or the purpose of the club (as well as anything else defined by the club rules) then you have to make sure that you provide to members the exact wording of the proposed change which is to be voted on as well as the purpose of the resolution. Remember special resolutions require at least a 75% majority to pass.

5. Make it interesting and relevant – AGM’s often suffer from low turnout. How can you attract more people? Is there someone who could come along as a speaker? Choose a comfortable venue – a cold uncomfortable location is unlikely to attract many people – do you have any sponsors and could you use one of their venues? When putting the agenda together build it around the memberships current concerns and or issues – people are far more likely to turn up if they think they will find out more information about the things that are relevant/important to them.

In the March edition of Midlands e-News we will be looking at how to get your committee off to a great start for the year.