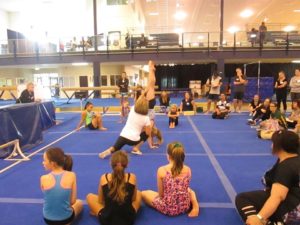 The first half of 2017 has been an explosion for the Education Team. The first event of 2017 was the FIG Artistic Level 2 Academy. The participants from New Zealand, Australia and the Philippines became very close knit throughout the week as they studied and worked together to pass their exams. The week was capped off by a visit by new FIG President Morinari Watanabe, who addressed the FIG Academy participants and experts. It is the second time the course has been held in New Zealand.

Over 110 coaches attended GymSchool, which ran alongside the FIG Academy. GymSchool was a collection of coach courses and workshops across all gymnastics disciplines. Having workshop modules that coaches could dip in and out of proved to be very popular, there was a wide range of modules offered including injury prevention which was highly attended. Coach development is a priority of Gymnastics NZ so it was fantastic to see so many enthusiastic coaches and gymnasts over the weekend.

A recent survey has gone out to all GymSchool participants to get a good understanding of the specifics they have been able to use back in the club environment. This will give Gymnastics NZ a great steer when deciding on workshop topics for future events, so if you have received this survey we’d really appreciate your feedback.