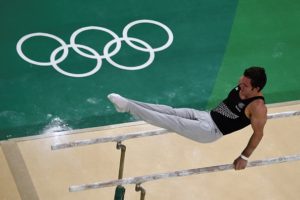 The 2016 Rio Olympic Games peaked extra interest for us this year, with our biggest gymnastics team since 1964.  Courtney McGregor (Christchurch School of Gymnastics) and Misha Koudinov (North Harbour Gymnastics, Tri Star Gymnastics) represented us on the artistic gymnastics stage, whilst Dylan Schmidt (Extreme Trampoline) was New Zealand’s first ever trampoline athlete at an Olympic Games.

Misha competed first up on Sunday 7th, NZ time.  He scored a 14.700 on specialty apparatus parallel bars though it was his 13.799 average on vault that placed him 16th in that apparatus.  Misha finished 45th in the individual all around competition.  Full results.

Courtney competed the day after Misha, with some strong performances.  Her 14.333 average on vault placed her 16th.  In the individual all around competition, Courtney placed 41st in a field of 68.  Full 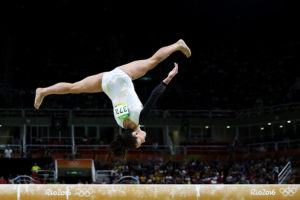 “Somewhere behind the athlete you’ve become, the hours of practice and the coaches who’ve pushed you, is a little girl who fell in love with the sport and never looked back…  Play for her.” – Courtney on Instagram the day before competition.

Dylan’s historic NZ sport moment began with a 47.795 for his set routine and 59.000 in his voluntary, a personal best which qualified him in 8th place through to finals.  “I was stoked to make the final,” Dylan said.  “It was my goal and to actually be there was amazing.”  Dylan then pulled out a 57.140 to place 7th in the finals.  “I’ve always been hungry for Tokyo and this just reinforces that feeling.  I’ll 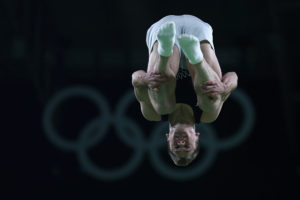 definitely be pushing for that podium in Tokyo and training hard.” Full results.

A massive congratulations to all three of our first time Olympians.  They all did us super proud and we look forward to seeing what the next Olympic cycle brings for them all.