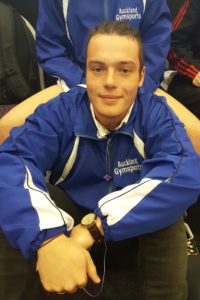 Sean Wilson (Xtreme Trampoline) just finished his first year competing senior international. First at the World Cup Arosa in Switzerland, then at the 2016 NZ Gymsports Championships before the Indo Pacific Championships in Napier.

One of his highlights from Switzerland was seeing other international athletes who he had only watched online before. “It’s really nice to see they’re human.” Sean also enjoyed chatting with 2015 World Champion Dan Li in her native tongue of Chinese, putting into practice language skills learned through his International Business qualification.

“It was different to competing in New Zealand, because nobody knows me overseas…Yet.” 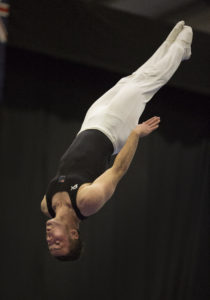 On competing synchro with Olympian Dylan Schmidt, Sean commented that he’d known Dylan for ages so any pressure in regards to partnering with an Olympian, would have just been in his own head. What was different for him was being the leader of the two for their routines.

Sean discovered trampoline after his passion for the circus started as a child, some 13 years ago, so it was no surprise to hear that Cirque du Soleil could be a future goal for him.

Advice from Sean to other athletes…
“Don’t take it too seriously.  And don’t be disheartened by negatives – if you land on your back, get up, have a giggle, then get back to training.”