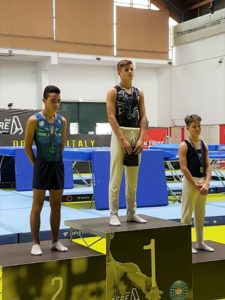 Blake Costley from Icon Trampoline Club in Auckland, finished on top of the podium in the 15-16-year-old age group, at the International Cup in Brescia, Italy. More than four points ahead of Italy with silver.

“Going into this competition my goal was to complete two routines that I was happy with and by doing that I knew I was in for a chance to make the final,” says Blake.

And happy he should have been after pulling out a personal best score of 98.645 in qualifications.

“Standing on the podium for the first time outside of New Zealand and Australia made me feel proud to be a Kiwi. It showed me that even though we are a small country we are still able to achieve big things,” he adds.
.
The 15-year-old is no stranger to international competition, having competed in three World Age Group Championships since 2013. 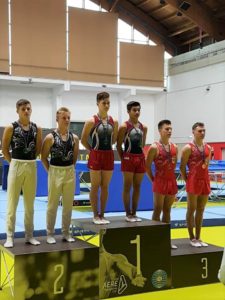 Blake added to his gold in the 17-21-year-old synchronised trampoline event with partner Reegan Laidlaw from Olympia Gymnastic Sports in Christchurch. The two pulled out a silver medal-winning performance, less than two points behind gold medalists USA.

“[Though we live in Auckland and Christchurch] we have been competing synchro together since the start of 2017. We have a similar jumping style which is good for synchro. We trained together in Milan the week before which allowed us to get used to the feel of jumping together again.” comments Reegan.

Reegan also pulled out a personal best score of 98.660.

Both have their sites set on medalling at the Australian Championships at the end of the month, where the Oceania spot for the Buenos Aires 2018 Youth Olympic Games is also up for grabs.

Meanwhile, in Colombia, 16-year-old Sam Dick from Tri Star Gymnastics in Auckland, won gold for his rings routine at the 2018 Pacific Rim Championships and placed 4th on high bar.

“It feels amazing. Unbelievable. To have all my hard work paid off. [the routine] felt amazing. The cleanest routine I’ve done in my life. That dismount and that stick. I just knew. I just knew.” Sam comments with his gold medal.

Sam followed in his two brothers footsteps and started gymnastics before his 5th birthday. No stranger to gold, he made his international debut in 2015 with an age group gold medal, in the all-around competition at Valerie Liukin in Texas. 2017 then took him to the International Junior Team Cup in Berlin, finishing twice on the podium with 1st on vault and 3rd on rings.

Sam trains 30 hours a week alongside brother Ethan Dick, who was the youngest member of the Gold Coast 2018 Commonwealth Games Men’s Gymnastics Team.

“We really are so very proud of our boys.” says mum Kathryn Dick. “It has been a hectic month, Ethan only just back from Commonwealth Games, which was phenomenal, and then Sam was off to Pacific Rim.”

“Both have definitely had a competitive streak from when they were very little but mostly I think it is their attitude. It is sometimes hard for them when their friends are off doing ‘normal’ teenage things and they have to train but they stay focused and just go and do it. They are also very humble and grounded – they don’t think they are anything special they are just ‘doing their thing’. To me, that is what makes them even more special.”

As well as Sam’s gold, New Zealand had representation across eight other finals at the 2018 Pacific Rim Championships.