Named to the cheers of school children at a Queen’s Baton Relay sports event today at Victoria Park in Auckland, the team were personally congratulated by the Rt Hon Jacinda Ardern.

Prime Minister Ardern was on hand at the selection announcement and also took time to encourage children as they ‘had a go’ at different Commonwealth Games sports.

Rio Olympian Koudinov made headlines this week after the Federation of International Gymnastics named a new gymnastics skill after him. He brings to the team a great deal of international experience as he heads into his fourth Commonwealth Games.

Bishop said “Glasgow 2014 was an absolute highlight and knowing I had the support of New Zealanders really took me to that next level. The Commonwealth Games are something special and I’m looking forward to Gold Coast 2018 where I know once again, the nation will be watching.”

For Ellis, Dyson and Dick, Gold Coast 2018 will be their first Commonwealth Games and, for Dick, his international senior debut.

Kereyn Smith, NZOC CEO said she was delighted to welcome to the men’s artistic gymnasts to the New Zealand Team.

“Gymnastics is an event that people love to watch and I know New Zealand will get behind these gymnasts at the Gold Coast 2018 Games,” she said. “It was also fantastic to have the team here to meet the school children and encourage them to give sport a go.”

“We also would like to extend our thanks to the Rt Hon Jacinda Ardern who joined us today to celebrate the Queen’s Baton Relay, welcome the gymnasts to the team and meet some of our legacy and current athletes.”

Tony Compier, CEO Gymnastics New Zealand said there is a strong tradition in New Zealand men’s artistic representation at the Commonwealth Games. “There is a fantastic blend of experience versus exciting new talent on this team,” he said.

“The opportunity for Misha and David to guide Ethan, Kyleab and Devy through such an elite event process, is the foundation on which any performance programme is built on. This team has fantastic potential, and we wait with great anticipation, their performances at the Games in April 2018.”

“Today’s team naming builds on the outstanding work done by the community in driving a performance programme to ensure these athletes are ready to compete on the prestigious Commonwealth Games stage.”

Whilst Devy is based in Canada, all NZ based athletes are from Tri Star Gymnastics where they train under coach David Phillips. Phillips took bronze on floor in Kuala Lumpur in 1998 and was a Sydney 2000 Olympian.

All five gymnasts will compete in the men’s artistic disciplines on the Gold Coast. 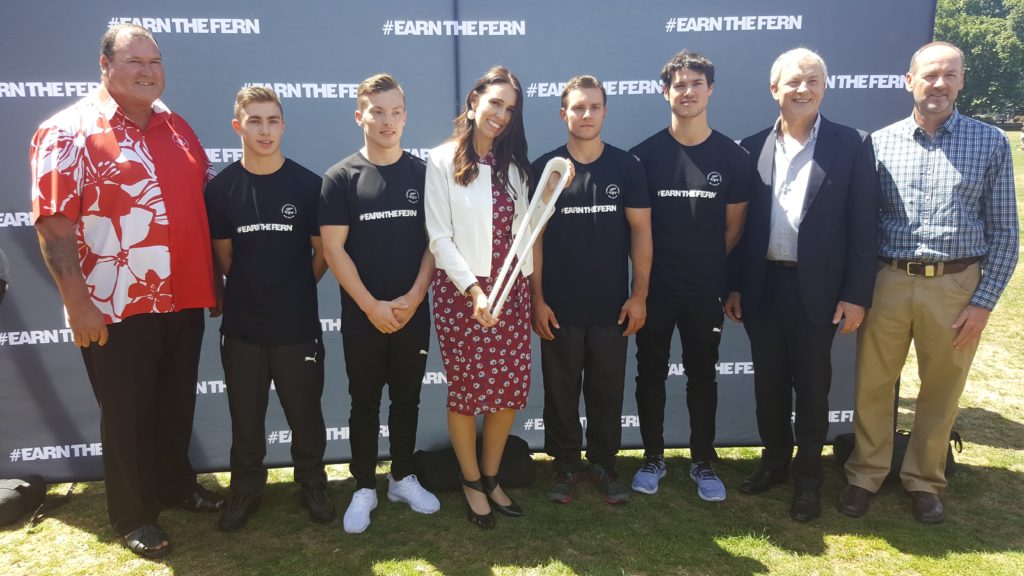 Gold Coast 2018 will be David’s second Commonwealth Games appearance, after Glasgow 2014 where he won bronze in the floor event. David will be competing floor, pommel horse, rings, vault and high bar in 2018. David is the current NZ Men’s Artistic Gymnastics Champion. His home town is Auckland where he trains at Tri Star Gymnastics under coach David Phillips. When he is not in the gym training or coaching, he enjoys hiking and mountain biking.

Gold Coast 2018 will be Misha’s fourth Commonwealth Games. His first Games was in Melbourne 2006 where he was the youngest member of the team. In 2018 he will be competing rings, pommel, parallel bars and high bar. Misha’s recent results include a 5th place at World Cup Osijek on floor in 2015 and 16th place in vault at the Rio 2016 Olympic Games.
Misha lived and trained in the USA from 2010, after being awarded a college Scholarship with the Ohio State Buckeyes. Misha recently returned home to Auckland where he trains at Tri Star Gymnastics Club under coach David Phillips. When he is not training and coaching, Misha enjoys gardening, cartoons and sun bathing.

Gold Coast 2018 will be Devy’s first Commonwealth Games and will likely compete in all six apparatus at the Games. With both Kiwi and Canadian heritage, Devy calls both Auckland and Vancouver his home towns. He currently lives in Vancouver and trains at the Phoenix Gymnastics Club under coach Alexander Pozdniakov.
Earlier this year Devy finished above all the Canadians at the Canada Elite Competition, and got a 4th and two 6th place finishes at the World Cup in Melbourne. There is not a lot of time that Devy is not thinking about or doing gymnastics – in his words “I’m absolutely in love with the sport!”

Kyleab Ellis
5 August 1996
Gold Coast 2018 will be Kyleab’s first Commonwealth Games appearance. He has competed at the World University Games, World Cup Szombathely (Hungary) and World Championships 2017 and specialises in floor and vault.
Kyleab’s home town is Whakatane but currently lives and trains in Auckland at Tri Star Gymnastics Club under coach David Phillips. When he is not training and coaching, Kyleab enjoys fishing, gaming and just chilling out.

Gold Coast 2018 will not only be Ethan’s first Commonwealth Games, but his first international competition as a senior athlete. At the 2016 Pacific Rim Championships Ethan placed 6th in the All Around competition and qualified through to all six finals in the apparatus events, before taking out the NZ Junior title back home. This year has seen Ethan finish in the top 8 at three events at the Japan Junior International Championships in Yokohama. At the 2017 NZ Gymnastics Championships Ethan competed against the seniors and placed 1st in pommel horse and rings, and 3rd in parallel bars and all around.
Ethan lives and trains in Auckland at Tri Star Gymnastics under coach David Phillips. When he is not training or catching up on school work, Ethan likes to play computer games and spending time with his mates.

About the Gold Coast 2018 Commonwealth Games

New Zealand athletes are aiming to compete in 18 sports (including four para disciplines) with selection to take place from November 2017 – March 2018.

The games will be contested between April 4th – 15th 2018, with more than 6,600 athletes and team officials to take part.

Based in Auckland, Gymnastics NZ is the national body responsible for the development, promotion, governance and leadership of gymnastics throughout New Zealand. Gymnastics encompasses both men’s and women’s artistic gymnastics, rhythmic gymnastics, aerobics and trampoline.