MAG Squad 360 had their first 2017 training camp last month where we caught up wth Head Coach David Phillips who provided a great overview of the Squad 360 Programme and what they’re up to. 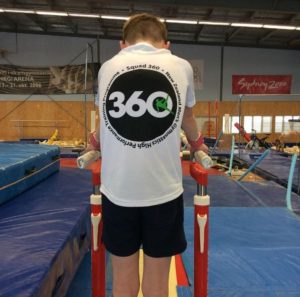 Squad 360 is the national men’s artistic gymnastics (MAG) programme designed to identify talented competitive athletes and coach them into the performance pathway. The original idea for a training squad for talented boys came from Mark Jujnovich (Tri Star Gymnastics). Historically New Zealand have had no more than three boys in any generation of an exceptional (MAG) talent, but in 2014-2015 Mark noticed seven or eight boys with potential. The GymSports NZ MAG Sport Development Committee (SDC) invited David Phillips to pull the programme together for the athletes and their coaches, and so Squad 360 was born.

The name 360 refers to a team score that would guarantee team selection to the Olympics which is the ultimate goal of the Squad. It also has references to 360 degree salto’s, turns and rotations that we all see and enjoy in gymnastics.

Squad 360 officially started in 2015 with the selection of 7 talented boys across two age groups. This grew to 15 boys in 2016 and has become 21 boys in the 2017 Squad. This year also brings the addition of a new age group and the Challenger and Talent ID groups, bringing the full Programme number to 58 boys. More about each level is laid out in the MAG Squad 360 Pathway.

Squad testing is done in December (one North Island, one South Island) for selection into Squad 360 for the following year.

The programme encourages consistent and sturdy progress as athletes work together whilst challenging each other along the Pathway. As the Squad members are from around the country, a bond is formed outside of their local clubs. 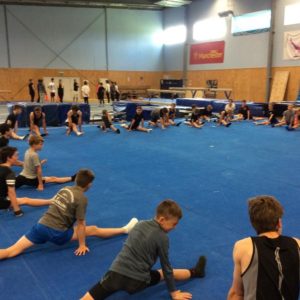 “One of the strategies of forming the Squad 360 was to come together frequently to create a familiarity between the athletes in order to develop their confidence and make competing at competitions easier.” David Phillips, Squad 360 Head Coach.

The Squad has weekend training camps four times a year – usually in Auckland. The Auckland-based athletes will often billet those from out of town to help reduce their travel costs.

You can see some of the other benefits for yourself on social media, with the boys’ Squad hashtag #360gains .

Six of the Squad 360 athletes have been selected to a NZ Team to compete at the 2017 International Junior Team Cup in Berlin, after which they will do a training camp in Birmingham. David hopes to get some good results as he values the competition as one of the highest level junior competitions internationally, and also sees it as an opportunity to measure the success of the Squad 360 programme to date.

“If we can compare ourselves to the rest of the world and are tracking well against international teams,  it means that we’re improving New Zealand standards and ranking, and that would be a great result. The original ultimate goal for the Squad was (and still is) to get an Olympic Team together.”

David shares that one of the biggest obstacles for Squad 360 is primarily a technical challenge.

“The programmes overseas that are producing high-level athletes are countries with a long history in the sport.  Therefore their technical evolution is ahead of the evolution of gymnastics in New Zealand. This refines their programme content and their quality standards. The more consistent technical insight that we can take and apply here in New Zealand, the greater chance we have of increasing New Zealand’s success in the world. We’re trying to take new ground by organising on a national scale, a successful programme for many talented boys.”

Funding and resources continue to be a challenge on the path to an Olympic target, but this is thankfully balanced out by genuine enthusiasm from the people that work and train in Squad 360, plus the buy-in from clubs which is really encouraging.

Squad 360 is without funding at this stage and human resource comes from volunteer hours from key stakeholders – the MAG Sport Development Committee, Clubs and coaches very generously volunteer their time and expertise to run the programme. The coaches come from the Clubs who run the higher level programmes such as Tri Star, Counties Manukau, North Harbour, Christchurch School of Gymnastics. 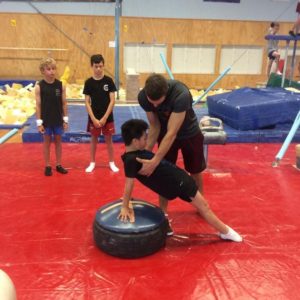 Squad 360 also invites international expertise to visit and add insight and value to training camps. For the second year running, Sydney-based coach Robert Hong has mentored and provided professional development for the coaches, and workshopped athletes at the January training camps. Robert has spent more than 20 years preparing and developing junior international athletes in Australia, including their World Championships medal winning Prashanth Salarathay, who continues to excel at World Cup level events. Robert is considered one of Australasia’s best technicians. The costs of these guest clinics, as with all Squad 360 activity, is paid for by the participating athletes and parents.