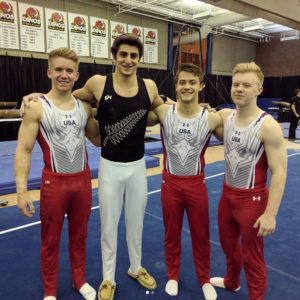 March has proved another successful month for Devy Dyson, our Canadian Kiwi based in Vancouver.  From making three finals at the World Cup Melbourne last month,  Devy has gone on to place above all Canadians in the FIG University of Calgary International Cup.

Devy made finals on three events and in the all around competition, placed above all Canadian athletes, with only boys from USA and China outperforming him.  Devy’s final placings were:

A week later, Devy then competed in the Twisters Invitational where he had an outstanding performance on rings and improved his all around score from Calgary.

Devy’s next competition is Provincial Championships, as he works his way towards qualifying for the 2017 World Championships and Gold Coast 2018 Commonwealth Games.

We wish Devy all the best in his competitions and look forward to seeing more of him on that world stage.