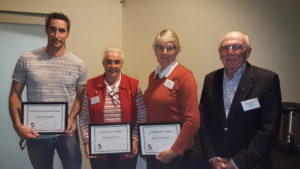 The 2017 nominations for Life Membership and Meritorious Award were considered by the Honours Committee and presented to the members at this year’s AGM by the Chair of the committee, Dr Warwick Darcey.

Since 1979 Jane has, and continues to, wear many hats – club owner, coach, course presenter and judge to name but a few.  Her passion for gymnastics continues to provide a source of inspiration and encouragement to many.

Theodora, or Dido as she is known to us all, was our women’s national champion in 1963.  A title she reclaimed another four times in the space of seven years.  Dido went on to represent New Zealand at multiple World Championships and in Tokyo, at the 1964 Olympic Games.  Since her athlete years, Dido has remained active in our community beit as a committee member or official.

Gareth Brettell received an award for his services to men’s artistic gymnastics.  On the Sport Development Committee since 2008, and Chair since 2010, Gareth has played an integral part in delivering courses, developing resources and in creating the current MAG Squad 360 Performance Programme.  His judging career has seen him appointed to more than 20 international competitions, the pinnacle of which saw him appointed by FIG to both the Rio Test Event and Rio Olympic Games last year.

Read the full citations to find out more about these three pillars of our community.