The 2017 Aerobics and Rhythmic Gymnastics Championships has come to a close at Auckland’s ASB Arena today. Over the past 5 days, 449 athletes from 16 provinces have competed for national titles. 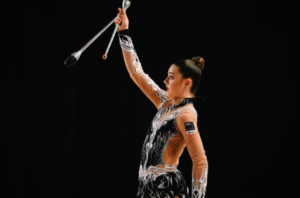 The 2017 New Zealand Rhythmic title has gone to Stella Ebert of Auckland, after placing first in all apparatus.  The Junior athlete applied for permission to compete in senior level, to rack up some scores towards qualifying for the Gold Coast 2018 Commonwealth Games and has taken out the National title in doing so.

“I’m so happy and excited right now.  I’ve put in so much work this year to get to this point and it has definitely paid off now that I’m National Champion. As far as the event went, it was definitely a learning experience, especially being quite young going into next year. After a bit of a rest, I’m going to focus on training and aim towards qualifying for the Commonwealth games in Gold Coast 2018” – Stella Ebert, National Champion

Stella was also awarded the Tilley Award which was given to the Senior International gymnast with the highest apparatus score, and the Heather Creagh Trophy, awarded to the gymnast who achieves the highest average score across all apparatus in an all-around competition. 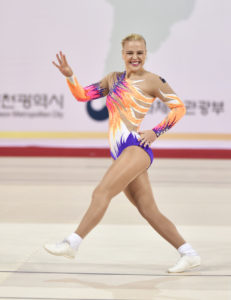 International Aerobic Gymnast, Laura Furse of Gymsport Manukau, retained her National title, and was awarded the ADP and International Trophy, given to the individual athlete with the highest score from each session.

Laura was New Zealand’s sole representative at the Aerobics World Championships last year in Korea.  Her next international competitions kick off in Hungary and Bulgaria at the end of this month.