An action packed five days wrapped up at the 2016 Indo Pacific Championships in Napier today, where 184 athletes from Australia (40), Canada (24), Japan (31), South Africa (8) and New Zealand (81) have been competing for Indo Pacific titles at the Pettigrew Green Arena.  New Zealand took five out of six of the senior titles. 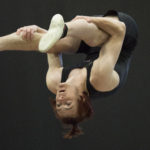 Lachlan (Lachie) Smith from North Shore Trampoline Club in Auckland, took the men’s senior double-mini title. Introduced to trampoline through a holiday programme at five years old, he has been hooked since.  He was “stoked” with his win, saying that his highlight was getting through all of his DMT passes. “I bombed trampoline at Nationals a couple of weeks back, which was a bit of a wakeup call, so there was more pressure for Indos.”

Lachie trains four times a week and aims someday to make it to the Trampoline World Open Championships. Lachie also competed in the senior individual trampoline event where he placed 6th. Lachie’s win (139.900) was just 0.1 ahead of Australia’s Ryan Hatfield (139.800) who took silver, and Jarrod Spear (129.300) also from Australia took the bronze. 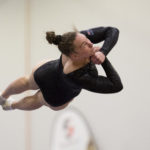 Bronwyn Dibb from ICE Trampoline in Christchurch had a clear win (136.800) in the senior women’s double-mini competition ahead of Australia’s Braida Thomas (133.900) and Leanne Van Rensburg (129.800). “Double-mini is my event so I was really happy to win it.” Often cart wheeling and doing flips as a child, Bronwyn’s mum decided to sign her up to gymnastics. From there Bronwyn discovered trampoline and has never looked back. Bronwyn’s first senior open competition was the 2015 World Championships in Denmark where she finished 8th in double-mini, and also qualified a spot at the 2017 World Games in Poland.

Bronwyn also took gold in the senior women’s synchronised event with teammate Rachel Schmidt (123.800 – Extreme Trampoline, Auckland). The two have known each other for a few years but had not bounced together before arriving in Napier last week.  Australia’s Lauren Sampson and Leanne Van Rensburg took second place (121.100). 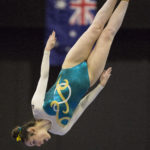 “I’ve always been a fairly average athlete, but I’ve worked really hard towards my goals in the last two years and people are now seeing me as a threat, which is really nice.” Lauren Sampson, Women’s 2016 Indo Pacific Champion. 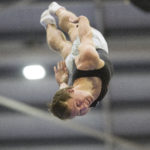 In the age group events Canada took the majority of their medals in the double-mini event and tumbling, whilst Japan dominated the trampoline events and finished on top of the medal table with 14 gold medals. South Africa with the smallest team of just 8 athletes, picked up a gold and a bronze medal.

The event itinerary for all countries, included a cultural experience where athletes learned how to do a haka, use poi and played tititoria and other traditional Maori games. Delegations were also treated to real kiwi meal plan during their stay, prepared by Jackie Ham and her team at the EIT kitchen. The final feast included a Maori banquet of hangi, seafood and pavlova. 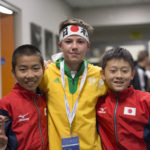 “Without a doubt the most outstanding part has been watching athletes from different countries constantly mixing with each other, chanting support from the stands, and showing true camaraderie in both training and competition. These athletes will return home with new friendships, and memories that they will never forget and may even last a lifetime.” Tony Compier, CEO GymSports NZ.

“Though the event is a competition, Indos has an expectation to include a cultural aspect and really highlight the fun community that is the sport of trampoline. I can’t imagine that any of the delegations will leave without feeling like they have not participated in both of these things.” Tony Compier, CEO GymSports NZ.