After getting a taste for TeamGym at the Gymnastics NZ GFA Symposium in 2016, Auckland and Northland Clubs are excited to be getting the programme up and running.

TeamGym is a relatively new discipline within gymnastics that has its origins in Scandinavia. The first official competition was held in Finland in 1996. Originally named EuroTeam, TeamGym received its current name in 2002 and now many countries around the world have taken it up. 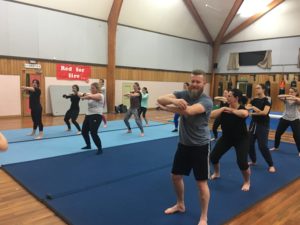 Hannah Prout set up Fantastic Gymnastics in Parua Bay in 2014 but originally she is from the UK which is where she first learned about TeamGym. The Club in England where Hannah was working, competed at the European Championships for the first time in 2002. In Europe nowadays whole families are making up teams in the TeamGym competitions and a lot of the children that attended TeamGym classes with Hannah back in the day are coaching TeamGym in that same Club. Two years ago the Club scored the ultimate success of winning the TeamGym competition in Gran Canaria. 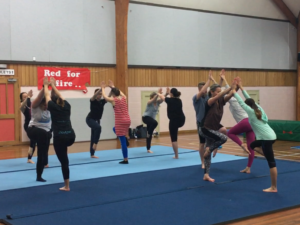 With her TeamGym experience from the UK Hannah wanted to start TeamGym classes in New Zealand and she was very happy when Christine and Tas from our Education Team planned a TeamGym workshop at the GFA Symposium in October last year. At Fantastic Gymnastics Hannah started with a TeamGym Display in December and when she noticed the fun and enthusiasm of the gymnasts at her club, she started running TeamGym classes from term 1 this year. Hannah has also been part of the TeamGym development team with Gymnastics NZ writing the National TeamGym Programme.

It was Hannah’s goal to start the TeamGym classes as participation, so initially, they weren’t open to competitive gymnasts so that the focus was all about having fun and joining in, not about skills and perfection. Fantastic Gymnastics will be running a TeamGym competition on Sunday 5 November with interest from 4 school teams, a junior club team and even a team of 12 adults. These adults join in the training on Tuesdays for half an hour when they come and pick up their children.

Rowena Deadman runs GymCity Papatoetoe. She immediately liked TeamGym at the GFA symposium workshop and implemented TeamGym classes in term 1 this year using the Wellington TeamGym programme. Rowena started with 16 gymnasts in a group of mixed ages, some of them new to the Club and going straight to TeamGym and some of them crossing over from other recreational gymnastics classes. In Term 2 she divided the gymnasts into two classes of different age groups: a group of 7 to 9-year-olds and a group of 10+-year-olds. There is also a group of home-schooled children of all ages and they really love TeamGym. 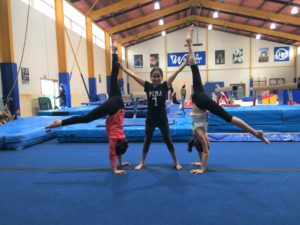 On March 6, Auckland Clubs attended a Gymnastics NZ TeamGym discussion where Rowena spoke about how she had introduced the programme and Dee highlighted what was happening with TeamGym elsewhere, particularly in the Lower North Island.

Therese Irving from Waitakere Gymnastics Club was also at that meeting and went back to her Club full of ideas to start running TeamGym classes. Therese told me last week: “our Team Gym class is proving popular at the moment we are just running it once a week but will look to increase that possibly in Term 1 next year.” 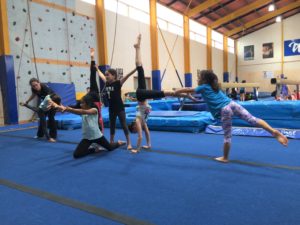 The gymnasts at Waitakere who have enrolled in the TeamGym class are a mixture of advanced and intermediate recreational gymnasts who now do both the rec comp class and the TeamGym class. They are between 8 and 13 years old and were looking for something different to do in addition to recreation gymnastics and wanted to have a bit of fun and learn new things.