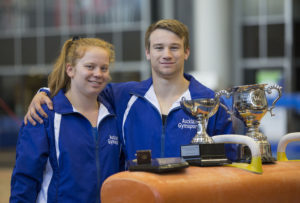 A big shout out to siblings Rachel and Dylan Schmidt from Extreme Trampoline as they head off to the Minsk World Cup in Belarus, 18 – 19 August.

At the Australian National Championships, Rachel won a silver medal in the senior female category and Dylan won his second senior international title. Last year in October at the Indo Pacific Championships in Napier, Dylan claimed his first gold as senior international becoming the Indo Pacific Champion. 2016 was a superb year for Dylan with bronze at the Pacific Rim, silver at the Rio Test Event and of course the amazing 7th place at the Rio Olympics.

The World Cup in Minsk will be Rachel’s and Dylan’s first World Cup event of the quadrennial.

Good luck and have a great competition!