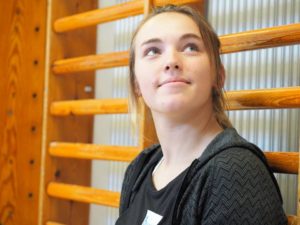 Just over 12 months ago Brianna McKenzie (Porirua GymSports) took off for her 1-year Ollerup Scholarship in Denmark. Brianna returned at the beginning of August and sat down with local Relationship Manager Megan Russell to talk about how the year went.

“The roller-coaster they call the year at Ollerup – when you leave for Ollerup you have a plan of what you will do after Ollerup and then when you finish your eyes have been opened to so many opportunities you really don’t know where or what you want to do”.

In the week since Brianna has been back in NZ, she has changed her living arrangements, moved to the other side of the city meaning she needs to apply for a new job and is now planning her future “whatever that might be”. 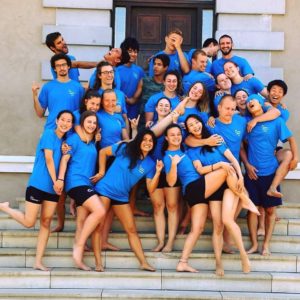 Brianna loved Ollerup and in her words would “recommend it to anyone” but it doesn’t mean she didn’t have some challenges while she was over there. In the first semester the ratio of international to Danish students was half and half however in the second semester the ratio was approximately 200 Danish students to 20 internationals, creating a split in the group and being completely surrounded by Danish speaking students. To top it off, Brianna also became injured – after giving something “just one more go”. She now highly recommends you don’t just keep having “one more go” – she sprained her ankle and ended up on crutches for two weeks. While away Brianna, who hadn’t tumbled or been on a trampoline for seven years quickly picked up a half in half out and a full in, full out (trampoline moves for those not in the trampoline community) much to her surprise.

Highlights from her here include forever friends from all over the world, getting an eye opener and a foot in the door with knowledge about new cultures and a new style of gymnastics, and morning assemblies were an inspirational start each scheduled day, some Brianna says she will never forget.

Brianna can’t believe it’s been a year since she was packing her bags and heading off and is really looking forward to the future. 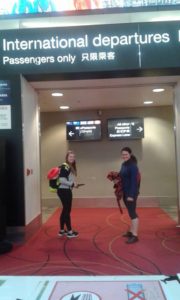 Holly Davies (Hamilton City Gymsports) was awarded the 2017 – 2018 scholarship from Gymnastics New Zealand. After just a few days on the ground following some long hours flying Holly sent through this update:

12 August 2017 – “We arrived at Copenhagen on Thursday morning and have just chilled out with a family that Millie has made contact with.  We travel to Ollerup today, I’m very excited and nervous at the same time!  My feelings when we left were New Zealand were all excitement. I couldn’t believe how fast this time had come around. I just wanted to get there and enjoy the experience of being in a different country. The flights were long, but I made it!  Now as I think that tonight I will be at the university it is amazing. I am rather nervous to find out what is it like there, to find out who I am rooming with, and the routine there, but I’m sure it will be amazing and I honestly can’t wait!! “

Sounds like Holly is settling in well and soaking up every minute of her Ollerup experience. Holly is attending Ollerup with Millie Manning who is attending on a private scholarship so keep an eye out for more on how they are both getting on.

Applications for Ollerup Scholarships for 2018 and 2018-19 are now open with one 12 month scholarship and two 23 week scholarships.