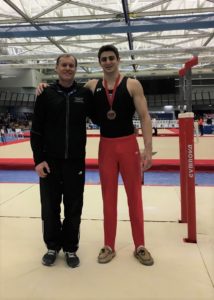 A big hand goes out to NZ senior MAG athlete Devy Dyson, on his performances at Elite Canada 2017 last week.  Devy finished first on the horizontal bar and third overall in the all-around competition.

“Placing first on the horizontal bar with a 13.45 was a highlight.  I think it’s prepared me well for the World Cup in Melbourne next week.”  says Devy.

Devy lives in Vancouver and trains at Phoenix Gymnastics, under coach, and fellow Kiwi, Sasha Pozdniakov.  Devy is also part of the NZ Men’s team to compete at the World Cup in Melbourne next week.

It seems gymnastics is not all that Devy is good at.  He also recently received a post graduate masters degree scholarship at the University of British Columbia, for his research in engineering.

We congratulate Devy on his successful start to 2017 and wish him and his team all the best in Melbourne next week. 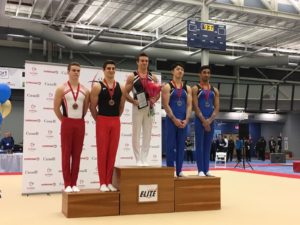