Janet McLea from Kerikeri Gymnastics Club was one of eight recipients to be awarded a Far North District Council Citizen Award. Janet received the award for her dedicated and ongoing service to gymnastics in the Kerikeri community, the results of which provide children with the building blocks to pursue other sports and activities.

It is with this in mind and her love of gymnastics that drives Janet to continue to provide programmes that best service the needs of her community. Janet has been involved in multiple committee roles as well as coach, judge and mentor to many. She continues to initiate and deliver school and early-childhood programmes, lead programme development for teenage coaches and even runs a shuttle service for school children. Janet has also been leading the search for an alternative facility for the Kerikeri Club, with the building now on the market. She has engaged a number of agencies and organisations in her search with an aim of future proofing regional gymnastics offerings.
Janet is more than just the ‘go to’ person for gymnastics in Kerikeri. 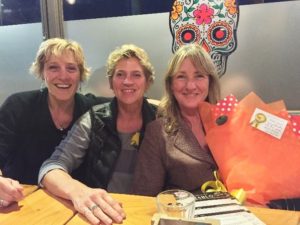 The impact that Janet has made on the community can certainly be measured by the children. There are very few within the greater Kerikeri area who have not met or have been directly coached by the positive and bubbly personality that is Janet.

“I want to show the children my passion for gymnastics, like Olga Korbut’s passion for gymnastics has inspired me. I want children to learn more skills and to accomplish things; it doesn’t matter how small or how big. I love it when children say they want to come back, because that shows how much fun they have in the classes.” – Janet McLea

We congratulate Janet immensely on her FNDC Citizen Award and thank her deeply for her years of love and dedication to our sports.