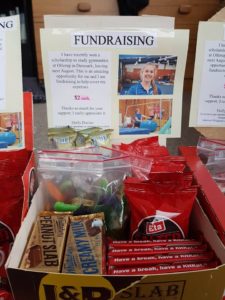 At the end of 2016, Holly Davis was named as the recipient of the 2017-2018 Gymnastics NZ Ollerup Scholarship. While the travel and education are a chance of a lifetime, it brings with it the challenge of raising enough money for the year. The scholarship covers Holly’s fees, accommodation and food leaving a significant sum still to be raised.

One of the things that characterises those who take on an Ollerup Scholarship is their willingness to work hard and strive to do whatever it takes to get themselves to Denmark. Holly is no exception – she is currently a lead coach at Hamilton City Gymsports coaching a variety of classes from PlayGym (Under 5), Recreation classes, Women’s Artistic Step 2 and 3 as well as helping out with delivering in-school and holiday programmes. In addition to this Holly has picked up a second job at Carousel Catering and in her spare time she has also fundraised money for her travels by:

In addition to her work Holly has fundraised $5,220 which is no small feat considering her significant work commitments.

As part of the scholarship, students need to choose their specific “line” of study. Holly has opted for TeamGym because it is a fast-growing area in New Zealand and she hopes to implement her new skills on her return.