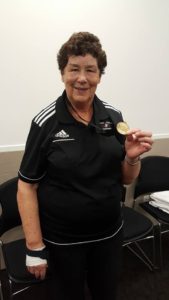 As part of our XTND 30th Anniversary celebrations, we are chatting with a range of people who have been through the XTND programme (or CIT, Coach-In-Training, as it was originally known).  In this edition of e-News, we talk to XTND Coordinator Carol Petrie about her extensive involvement with the CIT and XTND programmes.

Which clubs have you been involved with and in what capacity?  ie volunteer/ coach/ judge

I have been involved with Counties Manukau Gymnastics, previously Counties Gym Club and Manurewa Gym club since 1977. In the early days, I coached artistic and trampoline to the Recreation gymnasts. I have been the Club Treasurer for many years and I am the fundraising coordinator. I do much volunteer work at our competitions, mainly running the canteen and catering for officials.

How did you become a CIT/XTND Coordinator?

I took part in the pilot CIT programme as an adult coach when Mary Barbour was leading it. Gillian Shera from Howick Gymnastics Club was also on this pilot programme. Seventeen of us graduated towards the end of 1990. After the two-year pilot programme was completed, the CIT programme was introduced to the greater Auckland area with a leader from each of the three regions. At that time Tracey Laxon, who was with Eastern Suburbs Gymnastics, coordinated and then I took over in September 1992 and have been in the role ever since.

What do you like/love about being a coordinator?

I think the programme is an excellent way for teenagers to learn about teaching gymnastics. Spreading the modules out over two years and having five hours on each topic, seems to suit the junior coaches. Being a leadership programme also is valuable to the participants. I enjoy the involvement with the teens, and I enjoy seeing them grow into responsible, confident, young gymnastic coaches.

How many students do you think you have supported in Auckland/ Northland?

I have the names of all the participants from this date to the present time. Some of the coaches and judges of today took part in the CIT programme, namely Jacqui Godfrey and Gillian Tracey. It would take quite a while to count up the number of junior coaches that have been through the programme in Auckland (the list is rather long!!).