By the end of competition season, the events start to roll together with most following a fairly similar format. This year Franklin decided to liven things up in a big way.

Gymnasts were welcomed in the arena to the sounds of Alex Sandford with a song from the Disney film ‘Moana’. The Franklin Gymsports Junior Artistic Championships used their theme of Moana to fill the event with South Pacific 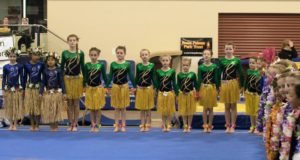 demi gods, island princesses, chickens and a cast of crabs. Franklin Gymsports took the opportunity to lighten things up outside of competition by not only theming their event but also having a number of performers throughout the day to entertain spectators and promote their theme.

As well as local singer Alex Sandford the audience were entertained by the Rosehill Intermediate Kapahaka group and the 8 count dance group. This was a great way to break up the sometimes flat periods throughout the day. This event was extremely popular with the 9 Clubs and 340 entrants making a huge effort to make sure they stood out in their own way. Those who get a special mention are the Harbour boys for their Maui costumes, Waitakere girls for

their hei hei themed costumes, Turn and Circle Gymnastics for their crab inspired outfits and the GymCity Papatoetoe entrants who made their own skirts.

The effort by organisers to create a great atmosphere and by Clubs and athletes in embracing the theme was inspiring. The theme will be carried on to the recreational event which takes place on the 27 August. We look forward to seeing the same enthusiasm and effort by our recreational athletes as well. Great work Franklin Gymsports. 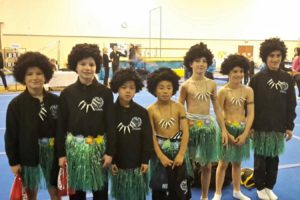 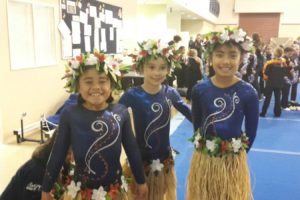