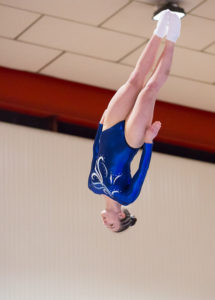 Trampoline and double-mini National Champion Alexa Kennedy was awarded an FIG World Class Gymnast pin from her performance at Worlds last year, the only New Zealander to have done so. FIG recognises athletes who make finals at the World Championships as World Class.

“Being a world-class gymnast has always been a dream since my very first competition, watching the seniors and wanting to be ‘that good’ one day. I feel like I’ve done that little six-year-old proud after all these years and just hope I can be one of those senior athletes for the new round of little six year olds.”

2017 was Alexa’s first open World Championships and she went in with a goal of placing top 24 in trampoline. Falling short of that goal, she finished 9th in synchro with partner Rachel Schmidt then qualified 5th through to double-mini finals where she finished 8th.

Alexa trains at Icon Trampoline in Auckland under coach Janine Glover, who she credits a lot of her success to – from being a constant positive influence, making “the best” hot chocolates the night before comps to being her rock for her entire career.

“Some days I don’t think I could even tie my shoelaces without Janine. She has been there since day one and watched me grow from a cheeky six-year-old, to a moody teen and hopefully to a decent adult. She is and always has been too good to me in all my years of this sport and I couldn’t do it without her.”

Alexa aims to place top 6 in double-mini at the 2018 World Championships.