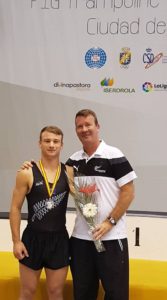 NZ’s first trampoline Olympian continues to make his mark on the world stage with a silver medal overnight in Spain.

Dylan Schmidt has followed up his 7th place in Rio with three World Cup finals finishing 6th in Belarus in August and 4th in Portugal last week, before his podium finish in Valladolid last night.  He qualified through to finals with a personal best of 111.495.  After a false start in finals, Schmidt pulled off an excellent voluntary routine which landed him the silver.  The gold was taken out by Dong Dong of China, who took bronze in Rio last year.

Schmidt and NZ Trampoline Coach Jarrod Heriot will now head to Belgium for preparations to the World Championships being held in Sofia, Bulgaria 9 – 12 November.