Athletes, coaches, team managers, chaperones and accompanying parents from all 3 Midlands Provinces (Taranaki, Waikato and Bay of Plenty) enjoyed their Nationals experiences around the country. Team Managers were asked to capture just a few of the many great moments from Nationals.
Well done to all Midlands athletes who competed and a huge thank you to everyone involved in getting the team ready, travelling and supporting those athletes.

We look forward to hosting in the Midlands in 2018!

BOP Artistic Team
What an amazing team we took to Nelson for the 2017 NZ Artistic Gymnastics Championships.
The whole team was thoughtful, friendly and supportive and achieved some great results including 7 gold, 4 silver, 6 bronze, 2 All Around National Champions, and 5 Apparatus National Champions.

As well as success in the gym, a lot of fun was had at the beach, ten-pin bowling, in the inflatable room and at the museum. It was great to see the kids catching up with old friends and making new ones. 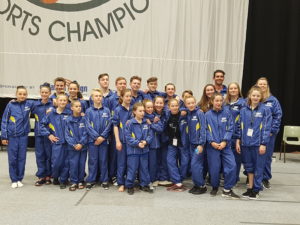 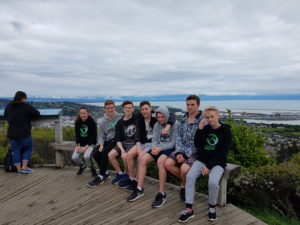 Team out and about in Nelson. 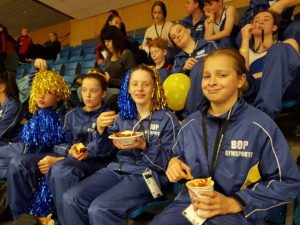 Overall the team had great fun and enjoyed some great team trips out and about in Christchurch. 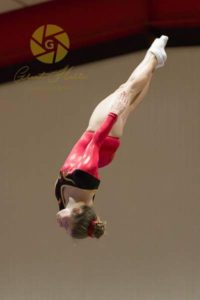 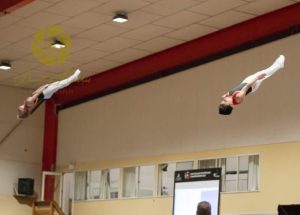 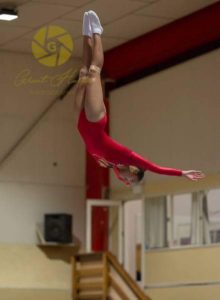 Taranaki Aerobics Team
An obvious highlight was Mizaan winning Gold on her 9th birthday and having the crowd singing “happy birthday”, but we are extremely proud of the success of all our athletes, bringing home 4 medals for a small team of only 7 athletes.

Before heading back to Taranaki, our Athletes and Officials enjoyed a “friendly” game of Mini Golf. 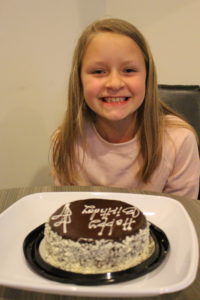 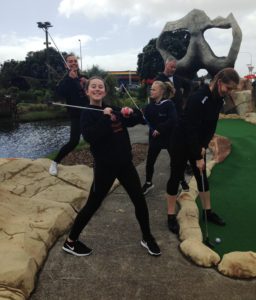 Waikato Rhythmic Team
Our Waikato Rhythmic Team was just a small one this year. Katelyn MacDonald, our level 7 gymnast, earned her first-ever nationals medal with a bronze in ball, keeping up with a very competitive group of gymnasts. We also had our Grade 5 Group compete at their second nationals with Katelyn MacDonald, Anastasia Argyroudi, Rachel Hamer and Maggie Burns earning personal best marks for the season. 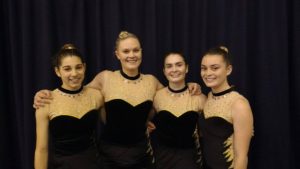 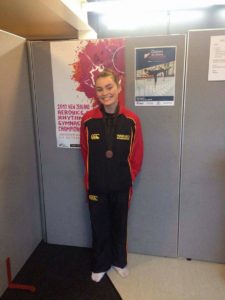 BOP Aerobics Team
Bay of Plenty sent its biggest ever aerobic gymnastics team of 14 girls to Nationals with girls competing in both the individual and multiple categories in all divisions.

Highlights for the team were 10 of the 14 girls achieving proficiency, all multiples achieving top 5 in finals, medals in all divisions, individual finalists in all divisions and medals to Emma Dooney Aeroschools level 5 (silver) and Catrin Pearce International Age Group 2 (bronze). 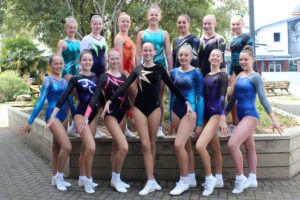 Keelin Leong, Waikato, STEP 8 – Keelin had an awesome competition. She was awarded the STEP 8 overs NZ All Around Champion. 1st on bars and floor. 2nd on beam and 3rd equal on vault.

Brooke Renner, Waikato, STEP 6 – through a tough field of STEP 6 unders Brooke performed amazingly and was awarded the NZ beam champion with a 14.233. 4th on floor, 6th on bars and 4th in the all around.

Ryan Moffit, Waikato, Level 8 – Ryan suffered a terrible ankle injury the night before he flew out to Nationals. He was a real trooper and managed to compete on 3 apparatus and walked away with a bronze medal on Rings. True dedication and commitment from Ryan. 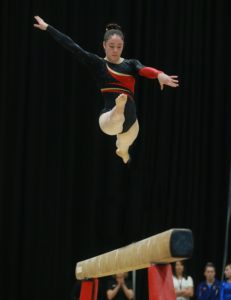 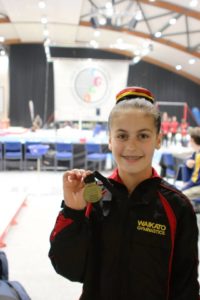 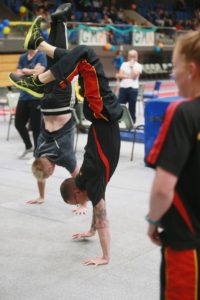 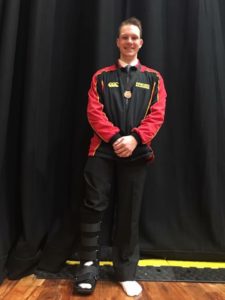 BOP Trampoline and Tumbling Team
From the trampoline perspective, we had an awesome year with 6 golds, 9 silver and 7 bronze medals and the overall power tumbling trophy. Not bad for a team of 18.

We enjoyed a fantastic excursion to the Antarctic Centre while in Christchurch and all the athletes got along like a house on fire. One of the highlights was seeing the athletes from different clubs staying together, getting to form new friendships and supporting each other.

It was a bigger team this year with MIGS now part of BOP and they enjoyed their first year back competing as part of the BOP Team.

BOP Rhythmic Team
The BOP Rhythmic team had a great time at Nationals 2017! We stayed at the fabulous Pulman Lodge, which provided top class accommodation and a base for our gymnasts to watch their friends on the live feed while resting before competing.

Our ten girls had fun making posters and decorating the stadium in true BOP fashion, with this year’s addition of helium balloons!

All gymnasts achieved personal goals and represented Bay of Plenty with pride. Two of our Level 7 gymnasts featured on the podium during the week, with Bobbi-Rose Holmes winning silver overall, and Tayla Dickson winning bronze for her clubs routine.

We are looking forward to Nationals 2018 right here in the beautiful Bay of Plenty! 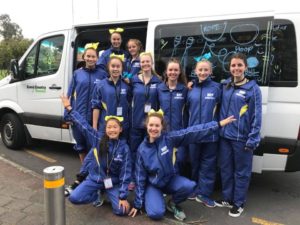 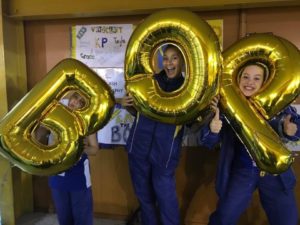 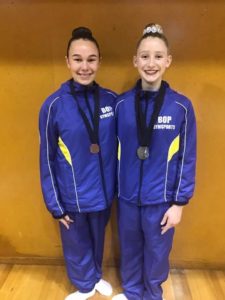 Taranaki Artistic Team
The Taranaki Team had a great trip down to Nelson. The girls performed really well with many personal goals reached. A couple of notable achievements include Taylah Dagg (STEP 8) who made it through to the second day on vault and placed 6th overall, Katie Neild was awarded a silver medal on floor on day one, and Shinae Stockwell placed 6th on floor in day one.

We thought it was a great venue and the event had a wonderful atmosphere and really enjoyed our time away together.

Taranaki Tumbling Team
Taranaki sent 9 tumblers to Christchurch to compete at the NZ Trampoline Championships 2017. After a brief period of downtime after Nelson, the girls dug deep and threw themselves into training and mental preparation to give it their all at Pioneer Stadium. Our girls performed remarkably well with 6 athletes making finals and 4 of our girls attaining proficiency. We ended up with 4 medals in total – Shinae Stockwell took out the gold medal in the 13/14 age group, followed closely by Brooke Hoskins-Lefevre taking the silver. Abigene Martin placed 5th in the same category. The Silver medal in the 15/16 age category went to Olivia Eiffe with Laura Jones taking the bronze. Mia Waruhia placed 5th in the 9/10 age group which was a huge effort coming back from a wrist injury. We are so very proud of our talented bunch of tumblers and we expect to see big things from them all next year in Tauranga. 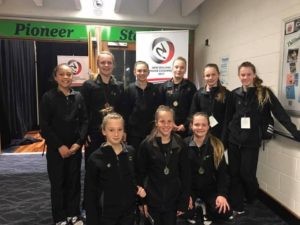 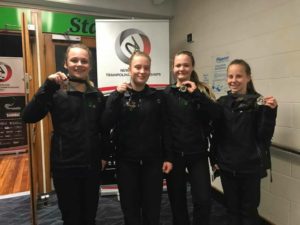 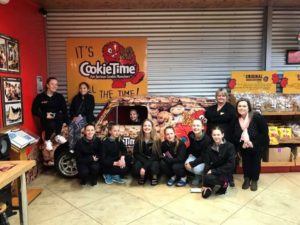 Some tumbling down time. 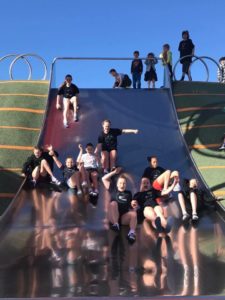