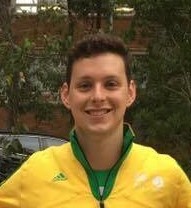 The 2016 Championships will be Jack’s sixth Indos – he has attended five as an athlete (2004-2012) and this year’s event will be his first as a judge.  Over the fifteen years he has been involved in trampoline, Jack’s best competition memory is placing 5th in DMT at the 2010 World Champs finals in France.

“I’m most looking forward to experiencing the competition from an judge’s perspective, and catching up with the Indos community again.  It’s always a great competition!”

We look forward to welcoming Jack to the Indos judging panel for the first time.