260 athletes bounced their way into the Pioneer Stadium this week for the 2017 NZ Trampoline Championships.  From Northland to Southland, they’ve represented 14 provinces around New Zealand, to battle it out for National titles.

The Championships returned to Christchurch for the first time in 10 years, and was organised by the Gymsports in Canterbury Charitable Trust, led by Nigel Humphreys and Jane Clark.

“We’re honoured to host the national trampoline community here in Christchurch for our pinnacle event.  My team and I have proudly delivered an experience we hope is worthy of our fabulous athletes and our spectacular sport.” – Jane Clark, Gymsports in Canterbury Charitable Trust.

Every second year our Australian friends join us for the Tran Tasman Challenge.  New Zealand versus Australia in men’s and women’s individual trampoline and double-mini trampoline.  Up to six athletes per team with the top three scores counting towards the team score.  This year the Kiwis took a clean sweep across all four events, to take the Trans Tasman titles back from the Australians. 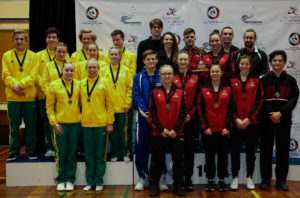 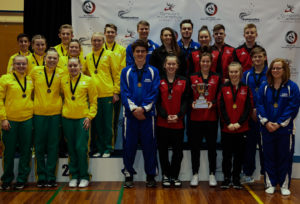 National titles went to Kieran Growcott of Canterbury, who took out both men’s senior events – individual trampoline and double-mini trampoline.

The women’s double mini title was relinquished by world number four Bronwyn Dibb (Canterbury) with a missed landing on her second pass.  Gymsport Manukau’s Alexa Kennedy came through and took the national title, before repeating it in the individual trampoline event. 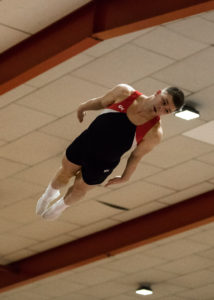 The junior international titles were won by Blake Costley for both trampoline and double-mini and the women’s junior double-mini title was won by Brooke Teear from Canterbury.

All four title holders are part of the New Zealand Trampoline Team joining Olympian Dylan Schmidt in Bulgaria next month for the World and World Age Group Championships.