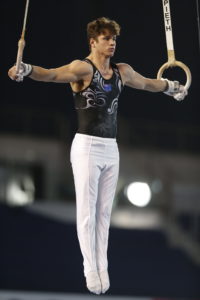 Sam was selected following strong results on the international stage in Germany and Japan last year before winning the Oceania spot at the Youth Olympic Games qualifying event in May. Sam went on to win gold on the rings at the Pacific Rim Championships in Colombia in April – his career highlight so far.

This is not the first New Zealand Team selection for the Dick family this year. Older brother Ethan Dick was the youngest member of the Men’s Artistic Gymnastics team at the Gold Coast 2018 Commonwealth Games.

16-year-old Sam is an all-around athlete with rings and vault his speciality apparatus. The Rosmini College student will compete in all six apparatus in the all-around competition at the Games.

“To be selected for the Youth Olympic Games is something that I just can’t explain. It’s going to be the biggest competition of my life and the feeling to once again represent New Zealand on the international stage is really special, and it can only get bigger and better from here,” said Sam.

The 2018 Youth Olympic Games will be the third summer youth Games, following those in Singapore in 2010 and Nanjing in 2014. The Games are a pre-elite development opportunity for the world’s most promising young athletes, allowing them to experience a multi-sport games environment while exposing them to learning and cultural opportunities and helping them on the performance pathway.

Sam began gymnastics when he was five years old, after watching his older brothers Henry and Ethan train.

“From a young age I’ve always loved gymnastics, but nowadays it’s more than just a sport to me. I’ve continued to train day after day for the past 11 years and over these years it has taught me many life skills: patience, commitment, dedication, respect, time-management. It’s also helped me to build up my confidence and self-esteem – all reasons why gymnastics is so important to me now. Without these qualities that gymnastics has taught me, I don’t know what I would be doing.”

Witnessing his brother compete all over the world has driven Sam to his own success. 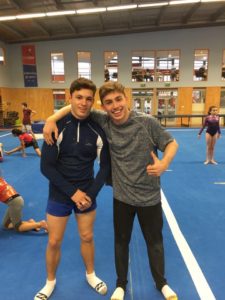 Sam and Ethan at training at Tri Star Gymnastics.

“Ethan inspires me as I see what he has been able to achieve with a lot of hard work. Dad says that we are both talented because of our genes (of course) but I think it’s the fact that we are both so competitive with each other and constantly trying to be the best.”

Proud mum Kathryn Dick is over the moon with the second family selection and pleased to see that the boys’ hard work and dedication is paying off.

“As young boys they never stopped climbing, jumping, hanging off things and running. Gymnastics was the only thing that made them tired at the end of the day. We never dreamed it would become such a huge part of our lives.”

Gymnastics New Zealand Performance Pathways Manager Anna Robertson, on behalf of the gymnastics community, congratulates Sam and his support team on his selection.

“The selection is not only testament to Sam’s focus and commitment, but also to the dedication of his support team and the competitive squad programme that both Sam and Ethan have been members of over the last Olympic cycle.  As a community, we look forward to celebrating this as we cheer Sam on when he dons the silver fern in Buenos Aires.”

The reserve athlete (non-travelling) selected for the Games is William Fu Allen from Gymnastics Nelson.

Career highlight: Winning a Gold Medal on Rings at the 2018 Pacific Rim Championships in Colombia

How did you get into your sport: I got into the sport at 5 years old. I would always go to watch my 2 older brothers, Henry and Ethan train and because they both did it, it was just natural for me to join in and give it a go.

What do you love about the sport: From a young age I’ve always loved the sport, but nowadays it’s more than just a sport to me. I’ve continued to train day after day for the past 11 years and over these years it has taught me many life skills such as patience, commitment, dedication, respect, time-management and has also helped me to build up my confidence and self-esteem. These are all reasons why Gymnastics is so important to me now. Without these qualities that it has taught me I don’t know what I would be doing.

What inspires you: My older brother Ethan inspires me as I see what he has been able to achieve with hard work and of course my coach David Philips is always pushing me to achieve the best I can and believing in me.

The Youth Olympic Games (YOG) is an international, multi-sport event for young athletes aged 14-18 with an educative and cultural nature that aims to foster the Olympic values of respect, friendship and excellence in youth.

The event, which takes place every four years, is promoted by the International Olympic Committee (IOC). The Buenos Aires 2018 Youth Olympic Games will be held from October 6 -18 with the participation of almost four thousand athletes from 206 countries.

The Youth Olympic Games is a pre-elite development opportunity for the world’s most promising young athletes and will allow young athletes to experience a multi-sport games environment while exposing them to learning and cultural opportunities. The Games will better prepare them for the world of sport and help them on the performance pathway.

New Zealand expects to send a team of up to 80 athletes to contest the third edition of the Youth Olympic Games. The team Chef de Mission is three time Olympic medallist Barbara Kendall.