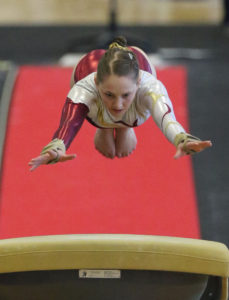 The 2016 NZ Gymsports Championships was officially opened by Mayor Tim Shadbolt, at ILT Stadium Southland tonight. Almost a thousand athletes from 16 provinces were welcomed to their national championships, with locals Southland marching in last to a massive home town cheer.

Athletes from all five gymnastics sports will battle it out for the sought after National titles. Equipment has been driven in from all around the country, to transform ILT Stadium Southland into a true action packed spectacle.

Artistic gymnastics titles are wide open this year, with defending champions not back to contest them. Olympian Courtney McGregor from Canterbury is now at Boise State University and defending men’s champion, and Commonwealth Games bronze medallist, David Bishop returning as a coach for the Auckland team. Luke Dobney and Kyleab Ellis from Auckland are both strong contenders for National titles, as their competition leads straight into the World Cup in Hungary, which they both depart for next week.

The high energy aerobics competition will see individuals, pairs, trios and groups take the floor, with some impressive toe-tapping routines. Laura Furse from Gymsport Manukau, who represented New Zealand at the World Championships earlier this year, comes in as a favourite for the senior title. 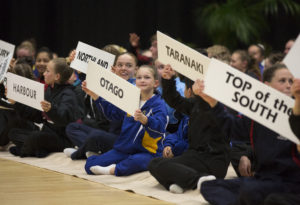 2015 silver medalist Keziah Oliver from Canterbury returns to the senior competition this year, whilst the junior international field features a New Zealand team travelling to Namibia next week to the Junior Commonwealth Championships. This team is made up of Grace Schroder from Gymsport Manukau, Stella Ebert and Havana Hopman from Auckland, and Anna Taylor from Canterbury. Joining them in Namibia is our junior artistic team of Stella Ashcroft from Canterbury, Isabella Brett and Samadiana Fariz from Auckland, and Charlotte Ryan from Harbour.

The trampoline competition will be headlined by Olympian Dylan Schmidt from Auckland. Bronwyn Dibb from Canterbury, who placed 8th at World Championships in double mini trampoline last year, sits as a female favourite.

The five-day event is open to the public, with some great school holiday entertainment all under one roof. There are not many opportunities to see the country’s best athletes compete all in one place and now we have that right here in Invercargill. The senior competition will culminate in the Super Session on Saturday night. Tickets are available from Ticket Direct or at the venue.