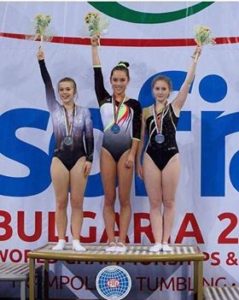 Madaline (Maddie) Davidson (Olympia Gymnastic Sports) returned home with not one but two medals from the 25th Trampoline World Age Group Competitions in Sofia, Bulgaria last week. The 18-year-old won a bronze medal in the synchro event with partner Kate Nicholson (Extreme Trampoline), and a silver in the individual event.

“This was my fourth World Age Group competition. I actually got my previous best result here at the same Stadium in 2013 when I placed 16th in the 13-14 year age group.”

Maddie is the first New Zealand representative in over 30 years to medal in the 17-21 year age group and the first Kiwi to double medal in more than 20 years. Her goal going into the Championships was to make finals, which Maddie did so in second place with a 96.820 in prelims. She then retained that position in the finals with a score of 53.280 (just 0.110 off gold).

Maddie was partnered with Kate Nicholson for the Synchro event just a few weeks before the Championships so they did not get a lot of training time together. They were also unable to compete synchro at the NZ Championships due to Maddie having stomach flu. Regardless, the two good friends qualified 6th with a 44.550 in prelims before taking bronze in the finals with a 44.050.

Before winning her World Age Group medals, Maddie’s 11-year career highlight was winning gold at the 2016 Indo Pacific Championships in both individual trampoline and synchro. 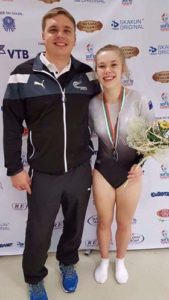 Maddie looks forward to moving into the international open division next year, with a world cup, Pacific Rim and World Champs in her sights.

“I feel like I’ve done my time in Age Group and look forward to sitting at the big kids’ table for the first time next year. Hitting a PB at my first World Championships is my next goal.”

Maddie’s piece of advice for other athletes… “If you really love it go hard. Work hard and you can achieve anything.”