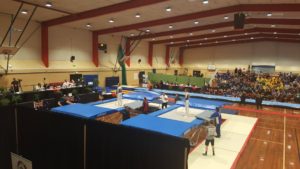 Dylan Schmidt from Extreme Trampoline.
Dylan became our first trampoline Olympian when he represented New Zealand last year in Rio. Dylan has competed in 3 World Cups this year and reached the finals in all of them coming 6th in August in Belarus, 4th in September in Portugal and winning a Silver medal recently at the World Cup in Valladolid in Spain.

Rachel Schmidt, also from Extreme Trampoline.
Rachel competed at the World Cup in Minsk, Belarus earlier this year. She competed in trampoline and synchro in Sofia along with Alexa Kennedy from Icon.

Rachel placed 36th in trampoline and 9th in synchro with Alexa – watch her qualifying routines.

Alexa Kennedy from Icon Trampoline.
At the 2017 NZ Trampoline Championships in Christchurch Alexa took out both Women’s Senior events – Individual trampoline and double-mini trampoline. In Sofia, Alexa competed both trampoline and the Double-mini, as well as synchro with Rachel Schmidt.  It has been more than 25 years since a New Zealand athlete last competed in all three trampoline events at a World Championships so this is already a wonderful achievement.

Alexa placed 35th in trampoline, 8th in double-mini and 9th in synchro with Rachel – watch her qualifying routines.

Lachlan Smith from North Shore Trampoline.
Lachlan has fought the flu after the 2017 NZ Trampoline Championships in Christchurch last month, to compete in the double-mini event in Sofia where he placed 30th.

The officials who travelled with these athletes are:

15-16 Years Age Group
Blake Costley from Extreme Trampoline recently became 2017 NZ National Champion in trampoline and on double-mini trampoline at Junior International level. Blake will be competing on both apparatus in Sofia in the 15-16 years age group and he will do the same as Alexa Kennedy; he will also compete in synchro with Reegan Laidlaw from Olympia Gymnastic Sports.

17-21 Years Age Group
Sean Wilson and Kate Nicholson from Extreme Trampoline will both be competing in Individual trampoline in the 17+ Age Group. And Kate will also be competing in synchro in this Age Group together with Bethany Long from Olympia Gymnastic Sports.

The officials travelling with the New Zealand team are:

We wish you all every success in your competitions.